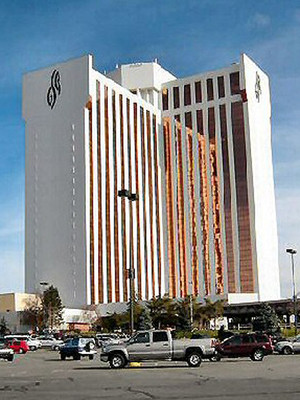 You can catch Jim Gaffigan at Summit Pavilion in Reno, showing Feb 17, 2023

Jim Gaffigan is also touring to:

Gaffigan has become one of the best in the business at stitching together a solid comedy set. Jokes fly every three or four seconds, some barely finished before he moves on to the next setup.

As a stand-up comedian, Gaffigan's clever, quiet, and family-friendly style has earned him a a rapid rise through the comedy ranks, and he now stands as one of the country's most popular comedians. His eponymous sitcom on TV Land, which sadly isn't coming back for a third season, broadened his appeal still further, to such an extent that he was picked by KFC to be replace Norm McDonald as Colonel Sanders in their TV ads. One of only 10 comedians to ever sell out Madison Square Garden, he's a New York Times bestseller and a Grammy nominee, as well as a father of five (phew).

This latest tour delves back into Jim's unique humor as he projects his observations on life. Catch him live when he tours in 2022, with rescheduled dates for his The Pale Tourist tour!

May not be suitable for younger audiences - parental guidance is recommended

One hour and 30 minutes

when someonecan not only sell out a thursday night show, but is also able... more

Chris B.: “Lives up to GREAT expectations!!”

Wow...a hour and a half went fast, but my wife and I laughed in tears... more

Sound good to you? Share this page on social media and let your friends know about Jim Gaffigan at Francis Winspear Centre.