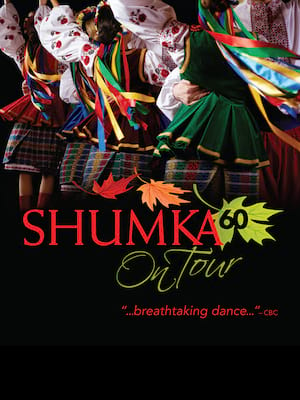 This vibrant company is consummately professional, well-rehearsed, and high energy. They never disappoint.

The Globe and Mail

In Ukrainian, Shumka means 'whirlwind', a fitting moniker for Canada's premiere traditional Ukrainian dance ensemble. After decades of breathtaking displays of artistry, art, and emotion across the globe, the celebrated troupe returns to their adopted homeland to celebrate 60 years since their formation on tour.

Presenting full-length, professional dance theater touring productions, as well as intimate concert repertoire pieces, Shumka has spent the decades promoting the rich heritage of Ukrainian folk culture. These productions marry the genre of Ukrainian dance with classical and contemporary movement to create dramatic storylines, which are recognized as distinctively Shumka in style, a genre all of its own.

Sound good to you? Share this page on social media and let your friends know about Ukrainian Shumka Dancers at Northern Alberta Jubilee Auditorium.